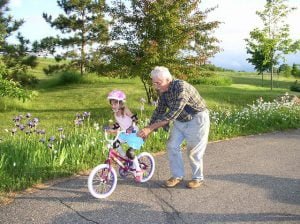 A Breakdown of States’ Visitation/Custody Laws

States have an interest in implementing some means of allowing grandparents access to their grandchildren, despite the debate about constitutionality.  Since the 1970s states have acknowledged the significance of grandparents (and caretakers) in the lives of children and have enacted laws accordingly.  However, since Troxel, many states have tailored their laws or principles around the finding that grandparents’ rights to access to grandchildren was not a fundamental one.

Arizona, Arkansas, Connecticut, Idaho, Kansas, Kentucky, Maryland, Montana, New Jersey, New York, North Carolina, North Dakota, Oklahoma, Oregon, Rhode Island, Wisconsin and Wyoming-all allow visits as long as they are in the best interests of the child or if they served in a parental role with the child.  The status of the parents is not a consideration.

Alabama, Indiana, Massachusetts, Michigan, Minnesota, Missouri, Nebraska, Nevada, New Hampshire, New Mexico, Ohio, South Carolina, South Dakota, Utah, Vermont   -there are conditions to grandparents being able to sue for visitation, mainly that the parents are divorce/legal separation (or going through one), deceased. Minnesota, New Mexico, Pennsylvania & West Virginia adds a provision that allows visitation where the child lived with the grandparent(s) for at least one year and the child is removed by a parent.  Missouri adds all of these conditions as well as if they were denied visits by the parents. Texas courts require all of these conditions, plus if the parent(s) is (are) incompetent or incarcerated.

Alaska,  there are conditions to grandparents being able to sue for visitation, mainly that the parents are divorce/legal separation (or going through one), deceased or their rights being terminated.

California, Colorado, Georgia  if the family is intact then grandparents have no rights to visitation.  *Some states have exceptions.

Delaware, is the most liberal in that it’s law allows “anyone” to sue for visitation.

Florida, passed a law in 2015 that allows grandparents visitation in very limited circumstances.

Hawaii, Washington and Tennessee courts have both ruled that grandparents rights statutes/laws are unconstitutional.

Illinois is distinct in that the grandparents must show that “unreasonable visitation” with children under 1 year old.

Iowa and Louisiana, limits actions for grandparents visitation to instances where the parent of the child (the grandparent’s child) is deceased.  This allows the grandparents to stand in the deceased parent’s shoes so to speak.

Maine has the “Grandparents Visitation Act”, where grandparents can seek visitation if one of the child’s parents is deceased.

Maryland, grandparents can seek visitation if they can prove either parent is unfit or if there are exigent circumstances.

Mississippi, the grandparents have to be the parents of the noncustodial parent, a deceased parent of the child or of a parent whose had rights terminated.

Grandparents who want to pursue some sort of visitation with their grandchildren should almost opt for maintaining a relationship with the parents.  Not that they don’t have a chance in court with getting a favorable decision regarding visitation.  The reality is that the criteria they must meet can be almost insurmountable where the parents object.

If you wish to schedule a free consultation with me to discuss your grandparent’s rights, please feel free to do that here.